Nothing is older than yesterday's post, so I thought I fire one more and add to it some information people may find useful when testing this on their own or trying to wrap their head around it, maybe even get some more people interested into it. It's also for the D&D fans among my readers ...

So I published the first part of the rules for Lost Songs of the Nibelungs yesterday: the Codex Ludi. First of all I want to thank readers for their interest. This is a small blog and I'm trucking along fine enough, but to see interest beyond checking the blog every now and then for updates is great and helps getting more of it out there. Thank you all! Let's have preview of what's in store.

It's a minor detail and will be part of the second booklet for the game (Codex Historia), but I believe the D&D crowd might appreciate the nod in that direction, so here it is. Those who have checked it out might have seen that there is some D&D in the game, but only at it's very core.

Six ability scores, but they are more of a resource and not fixed numbers, there are Saves, but strongly connected to the ability scores and work somewhat different. And combat, well, combat developed a bit away from the initial assumptions of D&D combat, but there are similarities. Namely I took the d20 that is used normally and divided it into a couple of d6 for a more detailed approach of the same (conversion rules will be below).

And yet, despite all those changes, it is possible to use the average Labyrinth Lord Character (or what ever you have, really) for a game of Lost Songs, as long as he follows the same basic assumptions. I won't go into detail about a complete conversion (yet), but will point out that if you were to create a higher level character for Lost Songs, you begin with rolling 3d6 in order for every ability score to mirror that the character already got some scars from adventuring. So every D&D character you might have (especially the from the lighter sets of rules out there) is easily enough ported.

You then just need to distribute the saves according to the rules in the Codex Ludi and reassign the skill (if you have them) and you are almost done. How to convert classes and special abilities is a bit too much to get into right now, but a short cut would be to give fighter classes another Combat Die, thief classes more skills (translate as seems appropriate) and change nothing for magic users (or clerics, if you have them). Keep HP and add Endurance or just roll it all again. The modular nature of all those games should make a transition easy.

Again, there will be more detailed conversion rules in a future post, but while testing it I took the approach described above and it worked. Bottom line is, there is still some "3d6 in order" in Lost Songs.

I use the D&D Rules Cyclopedia to bridge Lost Songs as soon as I have no fixed rules to work with. That's what you do as DM, you take what you need and make it work. A result of this is that I have a good idea how to make Lost Songs work right now in all aspects at the table without delay. And here is how I do it.

I'm going with monster entries for the English edition of the D&D RC here:


That's it. The only other thing you need to consider when DMing groups of enemies is to use the Initiative Value (I.V.) instead of rolling initiative for every monster (or it'll slow combat down quite a bit). Just use the characters initiative and if they are below the I.V., they are slower, if they are higher, they are faster. Declare and resolve actions accordingly after that.

The Combat Wheel and using the Environment (also updated)

In a fight it's usually a good idea for a DM to know exactly what happens. Lost Songs of the Nibelungs doesn't uses maps and miniatures but has (more abstract) board game elements nonetheless. Every character sheet has an area where players can put the dice in a fight to illustrate their actions. Since there are a lot of d6 involved and actions might get quite detailed, it's important for the DM to have something similar to work with. That's why I devised a Combat Wheel for Lost Songs. Behold: 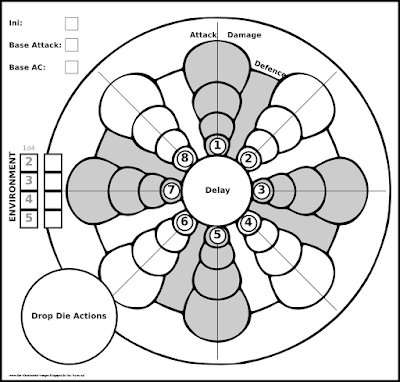 With this a DM is able to keep an overview of what's happening in the fight and has an easy way to illustrate it for the players. It's especially useful when handling groups of monsters against characters. There is one more twist to simplify things for a DM: the Environment.

It's something that I always forget, but it really helps creating a vivid and complex fight: combatants use their environment. So at the beginning of a combat encounter in Lost Songs a DM may create a Random Environment for the combatants to use by rolling a d4 first for the number of d6 available in the situation and then that number of d6 to see how effective it might be used. In the terms of the game he creates corresponding statics.

Every 1 that comes up with the environment roll is discarded and produces another d6 as a static for the characters to use. Every 6 adds another d6 for the NPCs/monsters to use. This way the same environment might turn out more or less useful to all. The DM may use those statics now as soon as his Combat Dice come up with corresponding numbers. Environmental dice are just used for their value, not for doubles or triples. Environmental dice produced because of a 1 are used to the characters' advantage, but also with their value only. 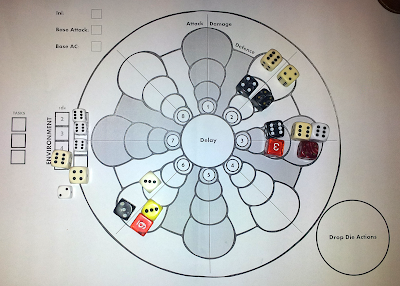 I admit, this was a mean roll. But that's not the point right now. You see here that the players 2, 3 and 6 are under attack. The monsters (goblins, if I remember correctly) used the dense undergrowth as best as possible (using corresponding static dice, it was an almost perfect ambush scenario) and cooperated a lot. Still died fast, though ...

There is more to come

Using the book itself and the advice here should help to give you all a good impression of how the game works and the directions it's going to take in the future. Next up will be a post about level advancement that's long overdue.

Feedback is, as always, very welcome. Writing rules is quite difficult, I found, and people talking to me about it is, right after testing it, a great way to find out what needs changing or further explanation.