Among other things, I'm working on The be67 Supplement. As the name on the tin says, it's not a complete set of rules, which was a difficult decision to make ... Can you play this without knowing D&D Basic or Labyrinth Lord or any of the other clones? I'm not sure. So to be on the safe side, I decided to go with the supplement approach. For that I felt it necessary to give the reader an designer's approach to tinkering with D&D by explaining what all the pieces are and how they work together. What's more, I wanted all that on a double page A5. It's ... a tall order, I guess. Still gave it a shot, and I'm reasonably happy with it. However, I wanted some eyes on this, so here we are. What do you guys think?

This is the general overview of the elements that make the game. Knowing this (and knowing LL or D&D Basic) will help you understand what we did here and where we deviate. How that comes together and how it plays will be explained in the subsequent pages of this supplement. So, buckle up.

What kind of game?

Role-playing games, as we understand them in the context of the original game, are about telling fantastic stories with a specific set of rules that allow a group of PLAYERS narrating setting-specific roles, with the game system and a GAMEMASTER (GM or Labyrinth Lord or Dungeon Master) providing the stage, feedback and rulings for their actions. The GM is considered to be the final arbiter in the game.

The interplay between players and GM creates an ongoing story while the system offers tools to specify and resolve turning points in said story, usually by using an assortment of dice and with the system output shaping the narrative in a way that produces a very specific playing experience.

What kind of playing experience?

System and GM provide SETTING, STAGE and OPTIONS how to interact with all that. Stage means a basic set-up what kind of story is offered in the greater context of the setting. Classically, we are speaking of some sort of fantasy world filled with wonder and magic and monsters, with the stage being anything from a town for adventurers exploring dungeons for fame and glory to the chance to play political intrigue on a king’s court. A starting point like that is usually aimed to result in a collection of ADVENTURES that sums up to what is called a CAMPAIGN.

With the stage set like that, players will chose the CHARACTERS (the “roles”) they want to use to explore their possibilities. This is considered a team effort, as the original game doesn’t allow all tools for every role, but instead different facets of the whole for different roles. That distinction is called CLASSES. The classes available are heroes one would expect in the gaming world (or setting), like archetypes of a sort.

To simulate growth for classes, characters collect EXPERIENCE. Experience is a measure of the success the characters have in their adventures and the players’ skill. Experience is collected in points (EXPERIENCE POINTS or XP) and character growth occurs in stages. With reaching a certain point limit, characters gain what is called a LEVEL (they LEVEL-UP). Each level-up comes with certain benefits that give a character more powerful tools to overcome the challenges GM and system are proposing in a campaign.

The core gaming experience, then, is about playing specific characters in an on-going campaign while using the tools available to the group to interact with the story in order to gain XP and levels utilizing dice and wits against an adjusting and intelligent opposition in form of the GM and the system.

What game tools, then?

The tools available to characters generally are expressed in abstract values and fall into four categories: active, passive, intermediate and special. Active tools interact, passive tools react, intermediate have qualities of both or are derived from the first two and special is everything else (for instance class-related abilities).

The active values are called ATTRIBUTES and comprise of the physical (STRENGTH, DEXTERITY, CONSTITUTION) and mental (INTELLIGENCE, WISDOM, CHARISMA) capacities of a character.

Attributes are expressed in numbers between 3 (low) and 18 (high) and give a basic understanding of how a character measures against other characters or the gaming world. It also shows strengths and weaknesses a character has, with high values giving bonuses and low ones giving penalties (usually range from -4 to +4).

Special tools can be anything from THIEVES SKILLS to SPELLS and MAGIC ITEMS classes or characters might have access to. They are usually very specific and give classes or characters some depth or flavor. DM TOOLS (like MORALE of non-player entities, e.g.) also fall into this last category and differ greatly between between editions and variants.

And that's that. If the rules variants and additions in the supplement follow up on this scheme, would the understanding of it (and the original game, of course) add to the reading/playing experience? Is it necessary at all? And is it "complete", as in, did I succeed? Please, help a guy out, if you can :)

In other news,  you can check out a free preview of the Ø2\\'3|| (that rpg I published) right here (or go and check out the first reviews here). This will be with the general populace for a little while now, but we will do some sales in the near future, of course. If you are in Europe, I'd put this on hold for a bit (wishlist it, or something). OBS still prints in the UK and since that isn't Europe anymore, tolls are mandated. No one needs those extra costs. They are working on the problem, and I'll do a happy sale as soon as they switch printers ...

If you already checked it out, please know that I appreciate you :) It'll certainly help to keep the lights on here ... 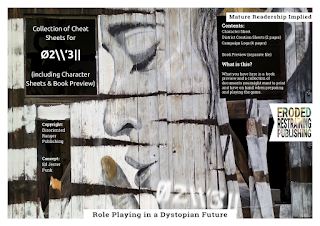 Announcing THE RISE OF ROBO-HITLER (and how to stop him)

Some might have heard rumors, some saw the signs here on the blog, some had been warned back in the day on g+ ... This is going to happen now, folks. Or rather: it is happening already for a long time and now we are playing it and artwork is being drawn and level-design is (almost) done ... we are way beyond the point of no return. It'll be just as gonzo and wild as people know from Monkey Business. So far it's one hell of a trip and, well, let's say, going places. #bunkersploitation

Daniel has been trying his pen a bit on some of the ideas I threw his way and we decided to use it for the first official announcement. Behold: 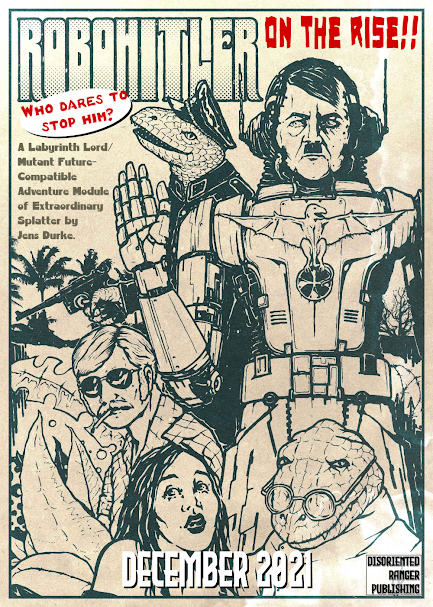 This tells a lot on one side, but not much on the other, so here's the pitch:

It's the year 1967 when US intelligence agencies discover a bunker full of Nazis deep in the Austrian Alps. They seem to be working on something monumental. Something that will change the face of earth, if it comes to pass. So world governments throw their ressources together to send a rag-tag team of professionals to face the unbelievable darkness that brews deep down in this bunker full of bogey men (and women) from a past thought overcome. This module will feature Lizard-Men!, Mutants!, Dark Science!, lots of Nazi cannon-fodder!, uncanny robotics! AND - of course - the titular ROBO-HITLER!!1!

- includes all the gore you can imagine -

This will be crazy-grindhouse fun and huge. Four levels with sub-levels, new monsters and items your wizard shouldn't own and morale dilemmas (maybe). Definitely lots of action and bombs and gunplay. We have way too much fun playing this (and I hope that will translate). It'll also feature additional rules to tweak Labyrinth Lord towards more of a grindhouse experience. It'll be called be67 (or "The be67 Supplement") and I've already given the tour for that here on the blog (looky here, for starters).

Expect more details in the very near future :)

Oh, and of course you stop him by playing this. Hehe