Assuming the world is still standing (2020 being 2020), we have good chances of publishing Ø2\\‘3|| late September December. Almost written, almost completely edited, completely illustrated and ready for frecking layout, that's where we are. It needs tying up badly. I want to be done with it and I want it out there ...
Ø2\\‘3|| - Role-Playing in a Dystopian Future (excerpts)
The year 2081 was a common year starting on a Wednesday. Only that it wasn‘t common at all. Imagine a world where every disaster humanity could come up with actually became reality. Global warming made the world practically a desert in most places, pollution killed off the rest. Nature, as we know it, is kept artificially alive where people managed to make geo-engineering work. Where geo-engineering didn’t work, nature turned very dangerous, and beyond that, it has turned truly strange.
Add weaponized artificial intelligence gone rogue, failed attempts of gene-editing, as well as freak accidents with nano-technology, and you get a nice backdrop for this dystopia.
...

It was a time of conflict, fueled by hyper-morality, call-out-culture and celebrated victimhood on the one side, and the extremes of everything opposite to that on the other side, screaming just as loud. There were military actions against the millions of people fleeing their homes because of disasters. There were purges in the streets as the political parties, the banks and the elites abandoned all pretense and came down on their enemies with open force. The great pandemic offered the right opportunity for them to execute long-prepared plans.
...
The setting for this game is as fucked up as one would expect after reading the above, and we encourage readers to explore this as deep as they dare. Anything goes, as long as it stays in the game. Yes, we don‘t care if you play enforcers for the political party in charge, or rebels, or anarchists, or just people trying to get by. You could play this as seriously as you can manage, or as the satire it is written as (Paranoia, anyone?) - just try to bring it all as close to its natural conclusion in all its aspects as possible. Let that world come alive and have fun doing so. We will provide the tools for that ... 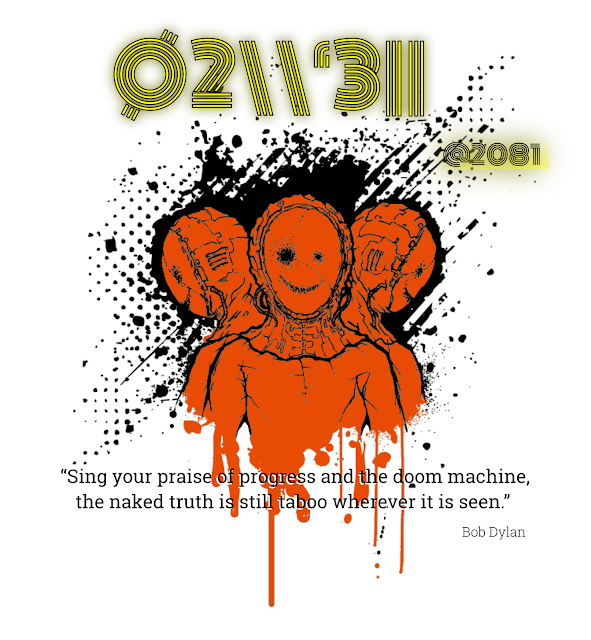 As far as the system is concerned, I draw lots of inispiration from Half-Life 2 (yeah, you read that right). In the transition from one media (video games, FPS) to another (rpg) lots had to change, but I kept the elements and mainly 'redistributed' them, using literary theory (among other things). My editor made a proposal how to describe it and this is what ended up in the book:
By nature of its medium [rpg] and engine [the system], Ø2\\‘3|| allows the players to immerse themselves in the game with the strategies provided by first-person shooters, all while providing the means to modify the experience within the framework of the game. The mathematical framework and resource-driven interplay between players and DM keeps the narrative from derailing into pure wish-fulfillment, emphasizing, like a first-person shooter, player skill and immediacy of experience, without compromising the core tenets of roleplaying flexibility.
It's complex, demanding and innovative, so if any of the above (or my work here on the blog) tickles your fancy, this will be for you.
The book offers a complete system, which a huge DM section full of tools and context to bring this all to life. I think we'll end up with roughly 250 pages of content. A nice little book. September 2020, folks.
Stay tuned ... and remember: it's all satire!
If you are looking for more content, find the dedicated group on MeWe.
Posted by Jens D. at 2:36 PM No comments: