I've been busy ... and slow about it. Wanted to write and publish more in June, turns out it wasn't to be. It is what it is, but now I have great news to share, so at last you get a little update here on the blog and another minor publication with some announcements about progress on all the balls still in the air here at the Disoriented Ranger.

First: Another Part in the Anthology Series!

I finally got around to putting Part 2: D&D and the OSR together. It might come to some as a surprise that this anthology will be mostly talking about the D&D Rules Cyclopedia, it's ins and outs, its potential and some house-rules, but that's just what a huge part of the OSR did when I wrote them posts.

I realized this only after committing to the title of Part 2, and it turned out to be an interesting conundrum: people tend to believe that the OSR is about playing games a special and distinct way, but I found that the OSR had been mainly (at least for some time) about analyzing, interpreting and documenting the origins of the hobby. That's not the sameAs a matter of fact, it means something entirely different in consequence, because when this movement (?) called OSR started, it was about showing that there was still merit to those old games. It was that anti-corporate "Look, this is still fun AND it is free and complete and rich with material!" kind of thinking. It was the old guard still playing the old games and talking about it. It wasn't about idolizing certain prolific figures in the movement for doing something new based on the original designs.

We can say now with hindsight that this process of idolizing (and monetizing) ended up being a huge shift away from the original premise described above. It lead to a romantic reinterpretation of the origins of the hobby and the personality cult aspects lead to very personal turf wars over opinion, politics and money. Now it is what it is.

That shift, however, happened somewhat undetected. Or rather, it ran its course, with some, not gonna lie, beautiful results. Eventually, it had to fracture and now "OSR" means something different and I was stuck with the older, maybe even obsolete spirit of the thing.

Still, the posts collected in this second anthology had been sincere contributions to the OSR instead of being merely looking at games long gone. It's that same spirit that still informy my designs. About that ...

It's happening. The problems are the usual: other than writing it, the game needs artwork, layout, infographics and editing. And while it's written to, say, 90% and editing is already waiting (Tod Foley is doing the honors here, you should check the guy out, he does great work!), there are some other daunting construction sites on this project. It will be done, eventually, and most like Fall 2022 ...

What it does have now is a cover ... sort of. I still can't decide on the color, so:

Other than that it'll come with 8 classes, a conversion guide to use other classes with D&D roots AND some tools for groups to create their own character classes. It'll also feature a completely novel expansion on the b/x combat system as well as a new way to calculate xp. It's a lot, I guess, but all of it based on the original designs and I take care to make that transparent ...

What else is happening?

That's the thing: too much is happening in the world as is, but I keep getting some new ideas every now and then as well. I'll follow up on anything worth sharing in future posts. There might be another game in the works. The pitch is:

Humanity has advanced to melt with machines, but had to flee underground fast as aliens terraformed earth into something very different. Thousands of bunkers got lost in the process. The leader AI has degreed to reconnect or salvage those bunkers and gave the contract to Bunker Busters Inc., because corporate ideology survived the great transition, naturally. And they are still up to no good: in order to save a buck, they'll print poor souls that didn't make the jump to a higher consciousness only to end up on some corporate hard drive instead and they send them into those bunkers to do the job. Players are corporate AI monitoring the process, forcing the prints to do their bidding, if necessary. A rules-lite D&D inspired game that plays in the tradition a roguelike ... randomly generated "prints" that'll often die horribly and bunkers full of deadly surprises and surreal metaplots to manifest through exploration.

I have some general ideas about that game. It should be fast and random, very light on the combat and big on exploration. The players will be a bit blind as they try to navigate those bunkers through the experience of the so-called prints. And those prints might have different ideas about what they'd like to do. The beauty of it is, that the base character (an AI admin, if you will) can burn through lots of prints and still advance independantly. There will be "losing" conditions like atrophy or infiltration (or being "fired"?), but the "dying" happens mostly to someone else and, I hope, in an entertaining way. It has a cover, too:

I'll build on that here on the blog for the rest of the year, I think. Play-testing will also start as soon as the core engine is done.

Other than that, I will keep publishing the anthology series (Part 3 should be out end of this month, then work starts for the PoD of that) and Robo-Hitler is also still in the works, but turned out to be most difficult in the art department (it'll take time and I have no controll over that whatsoever). Other projects might be more doable in that regard and might therefor be published earlier. Blogging will continue as it does ... sporadically. I hope I'll be able to produce more content here as well. We'll see.

I'll close with teasing another little side project of mine. Lost Songs of the Nibelungs is not forgotten or laid to rest, it's very much alive, but needs some more work. That said, I've always been a friend of the idea to publish parts of the rules as their own thing and started doing so some years ago. One of those will receive a long overdue revision and expansion in 2022. Behold: 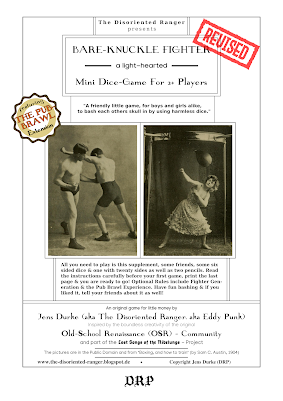 Oh, and also check out Part 1 of the anthology series. Totally forgot about that ...