Week of Vengeance: Outrageous Ulterior Motives (NO ONE POSTS ALONE-Edition)

All this talking about vengeance made me remember something that happened during one of our games so many years ago and I thought this is the place to share it, because this is the

The players and their dice


This was at least 14 years ago. I have no contact whatsoever with those guys as I write this and we didn't get a chance to play a lot. But one of those sessions had been remarkable. Not necessarily for the adventure we played or the system we used, no, the highlight was the girlfriend of one of the players who wouldn't play with us, but observed instead. But let's start at the beginning ...

We met at this guy's house. A group of four people, I think. Some beer, some dungeon crawling, the works. I can't really remember if I had met this girl before, but it had been one of the first times I'd seen her. She wasn't into that nerdy stuff, but would indulge us with her presence at least.

It is strange to have someone present that isn't really into the whole experience and just wants to watch and usually I at least offer them to play a henchman or something easy like that. Give them a chance to participate, you know. But it's not only that she wasn't into it, her friend also went to great lengths to discourage her from even trying. I wouldn't say he was mean to her or anything, but he wasn't nice about it either. I remember her commenting on some discussion at the table and he mocked her for it. Man, he even tried to make a running gag out of it.

Anyway, I'm really not sure what drove the guy, but I saw her mood changing from mildly interested to mildly annoyed. Couldn't have that at the table, but what was I to do? I did my best to get the game back on track. It was merely by accident that I would give her a chance to vent a bit and she took that chance with all she got.

Because it's the little things ...

Since she really hadn't shown enough interest to play anything, I had invited her to sit next to me to give her an impression what was happening behind the scenes. I'd also offered her to answer all the questions she could come up with and would occasionally explain some of it as it occurred. Her boy friend kept doing what he had done the whole time and then the group had an encounter that started a fight. What I did now was offering rolling my dice for the encounter.

It was the beginning of the end, because once she started rolling, her friend was in a world of pain. It was uncanny how she made those dice sing as soon as he was to be attacked or lost hp. The guy almost cried, believe it or not. 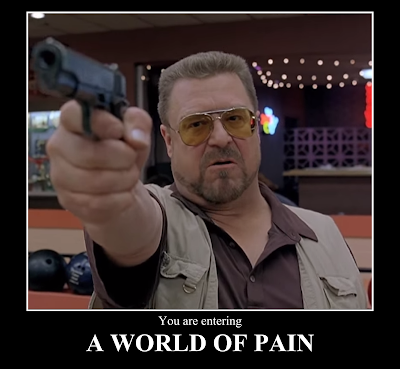 I know very well that all of this was chance, but I've seen players warming up their dice. Damn, I have done that on occasion. Gamers can be very superstitious about those kind of things and this gamer had been no exception. He took it personal.It was as if she was hitting him, not his character. And she ... well, she enjoyed it immensely to see him squirm.

I really believe he had it coming. The table had turned, now she was teasing him. "It's only a game!", she'd say. And then she'd crit him ...

He managed to survive that encounter. Barely. The other characters had no significant wounds whatsoever. To the endless amusement of the rest of the table, I might add. He'd lean forward when she was to roll against another character, mumbling something like "Now you all get some!", but as if to mock him even more, she'd miss most of the time or do minimal damage.

I swear, after the encounter he tried to forbid her to roll the dice for me again. The game went on and things went back to normal. I'd still let her roll some of my dice, but it ended mostly harmless and she'd soon leave us and go to bed. I believe she got what she needed, she got her little revenge.

They wouldn't be together long enough for her to actually play with us at the table and I'd loose contact with that group soon after.

This was mine, tell me yours!

Well, that's it, my little story of revenge at the gaming table. No one had been actually harmed. I also believe it's not uncommon during a game that one gets the urge for revenge. Sometimes it's a story worth sharing, like I believe this one was. And I, for one, would like to hear more of those stories. If you got one to share, please feel welcome to do so in the comments.

Also, be nice to your girl friends. Especially if there is a slight chance that they one day might use those dies against you ...