Part 2 of Expanding on the Basic Random Terrain Generator (with Fairies), Communications in the Dark Ages (on the side) and Complexity in Game Design (because this title isn't long enough ...)

Here we are again. In Part 1 I brought you all back up to speed about that Basic Random Terrain Generator I wrote about in June. That was a big one, so a re-cap was necessary. And since everything is connected, I used the opportunity to talk a little bit about communication in the Dark Ages and complexity in game design. Either way I turned it, it all wanted to be in the same post. So here we are with the second part that's basically expanding on the ideas developed in the first (and on the B.R.T.G.), so feel free to check those out before reading this one. But I'll provide all necessary tables of the original post here, too (updated versions, even!)**, so you'll only miss out on some great lunacy :-)

Without further ado: Variety and Technique

A high level of variety usually results in some complexity, but often enough also comes with difficult and extensive procedures to realize it. I believe the system described for the Basic Random Terrain Generator is somewhere in the middle, as it allows for some variety, is easy enough expanded on and easy enough to use. Basically you roll 3d10 per hex-field* (let's call them A, B and C). The first digit (A) gives the direction, the other two are interpreted as a d100 for this and give indications about the terrain of the hex-field. 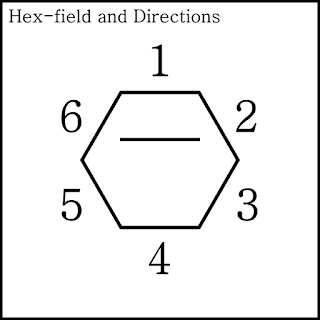 As you see, the numbers 1 to 6 on (A) give the direction, every higher number indicates a layer added to the initial hex-field. The very first hex-field is always the base for direction and if a direction points towards an established border, move clock wise and add the new hex-field at the next possible position, like so:

Numbers 7 to 10 on (A) describe layers and borders: 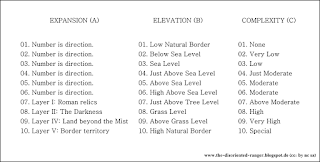 I had kept it vague in the original post about the values of those layers and what they mean. I'm able to expand on that now, so here is how some of this manifests in a hex-field:

Realm of magic and the fairy folk. Magic is strong in those areas and they count as the centers of the ley lines that move through the land. It's also a thin veil between reality and the other side. The numbers rolled indicate which fairy race is dominant in this hex field (B), why they are there (C) and where they are specifically from (interpret BC as d100 just like terrain, but in a smaller scale). This way you get some quick ideas what's going on in an area:


So it's a legendary underground complex of the Deep Elves that's the reason for all the fairy activity in the area. Maybe something like The Magnificent Fungus Gardens of TeiLyen or some such thing. I could do all kind of shenanigans with such a thing. Quests for herbs with legendary magical properties, exploring this Underdark in general is promising. You get the idea ...

The Darkness is evil and evil spreads as long as it can feed on something. A hex-field with this layer is completely contaminated, only isolation (stories of something stirring in the dark, like I described in Part 1) kept it from spreading further. Every evil manifests differently. There is the "what" (B) (a specific kind of evil, if you will) and there is the corruption (C) (the theme this evil strives on). If there are other layers in the same hex, they are tainted by evil (as they all affect each other, of course).

So the source of this evil is also underground, but not as deep as the place of legend is. It's somewhere in between. Undead corrupting life itself is a great thing to have. The dead won't rest here. Classic Zombie Apocalypse scenario (get bitten by a Zombie and become a Zombie, I'd say, but there's room for interpretation). No wonder people avoid this place. Also: undead fairies (deep elves)! 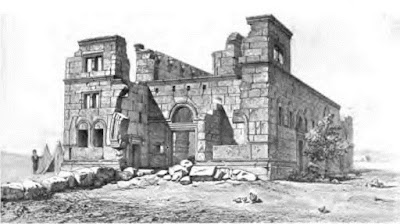 Roman presence should still be felt in parts of a setting in Lost Songs. A high culture has the tendency of putting it's stamp on an area, be it roads and ruins of towns or knowledge and habits. But what exactly remains and is kept alive or intact, is a matter of chance, really, so those two table give (B) indications of what is left and (C) how strong it's influence is in an area.

That's the last layer for this specific hex-field and it's a small Roman community somewhere deep in the woods that goes on as if the Roman Empire never went down. "Actively Roman" would mean that they still have some trade with their surrounding communities going. The Darkness that taints everything will have it's claws in this community, too. My first impulse when reading this was undead Roman nobility, draining the life out of everything, maybe with an army of always "recruiting" undead Roman soldiers (which would be cool). And since they settled in fairy territory, they'll have an ancient feud (maybe eternal now) with the court of the Deep Elves going, which manifests in various stories and legends about those encounters and some very good ideas where one shouldn't sleep in a cave or go too deep into the forest. So that's that.

A Border Territory is just that, a political border. The numbers will give a DM some ideas what community is living behind the border (B) and how they interact with the characters' tribe (C). This is necessarily vague at the moment, since at that time everything that wasn't Roman was constantly changing. Cultures moved and mixed, there's an old faith and a new one (with at least two important trends, no less) and several new or old or individual or forgotten ways of live that are possible. The important part is to have some strong distinction between the tribe the characters are from and the tribe behind the border.

In this case we got some friendly neighbors with a strange faith who are campaigning for an alliance (active trade and politics, I imagine some strange cultists are abound, too). There is still a border, but free travel (just different jurisdiction and customs). Put some other layers in there and the dynamics might change (drastically, even), but as it is, it's a nice border.

The big picture and what happens next

There you go, that's the whole thing (you'll find the one missing table below in the footnotes ...). It's not yet a world engine, but it's a sandbox/storybox generator. By rolling 3d10 you establish a tribes known terrain as long as possible. Natural and unnatural borders will eliminate you choices until there's just one field left and that's where your tribe came from.

How big or small this territory is, will be a matter of chance. That's a good thing, since the game is about exploration and expansion. In an ideal case, characters will form their own tribes at the fringes of their old clans territory (at level 10, after exploring and "opening up" the whole thing). It's all open to change. Find the source of evil, destroy it and get rid of one layer in the process (in the example above it would get rid of the undead menace, allowing safe access to that legendary elven place and better trade with the Roman town ...)

The landscape will be up to chance, too, which is also a good thing, since creating a territory random and from scratch will need making decisions how all of it fits together, which I believe to be a great tool for a DM to get very familiar with the lay of the land (at least that's how my brain works).

The next step in this must be for me to make one of these territories to see what's what. At this point I'm quite confident that it'll all work and it'll need just minor tweaking, if at all (there's lots of room for interpretation beyond the random results, so freak results are more like a benefit, if handled right).

Since this is part of the game is complete now, I might as well put it all into a pdf to have it in one place and for the general public to use and play with. Yay!

Comments and questions are very welcome, of course. I know this is a lot to digest, but if you read it all up to this point, you very well deserve all questions you might have answered.

Thank you all for tagging along!

** As an additional rule "unrealistic" results are treated as local phenomena. So if  a result puts a low natural border and a high natural border side by side, take the middle ground as if  time and natural forces had taken their toll. So the result had still been accurate, but for something that had happened a long time ago. adds some history to a setting ...  Here is a (slightly updated) version of the table in the original post: