How to kill a horse (Again about Endurance...)

This is not about animal cruelty. It's rather a dry-run for the Endurance system I proposed here and here (and thanks to the comments by 1D30!).

I really hope somebody will take the time to read all this (and maybe comment?). Sorry for the huge post, I guess (it's not what I meant with "Again about Endurance").

After doing a little research, I realized it's hard to find rules for extreme travel situations like forced marching or how far you can push a horse without killing it. This might be due to the fact that to many factors need to be considered or that it doesn't happen that often in a game and a rule of thumb is enough to make it happen.

But it should be possible to estimate the breaking point for an individual (be it character, npc or monster) derived from actuall play and I think it should have a place in the game (not just a number in a table...).

So what do we have?


Travel rates will be taken from the Rules Cyclopedia as a guideline for the loss of 1 Endurance per miles travelled:
Interesting part:

"The travel rates listed here are possible but will kill the horse if only one is used for the entire trip. Typically, a rider only manages to achieve these rates by riding one-third the distance listed and trading his horse in twice at way stations for fresh mounts. At the end of the day, he and the three horses are exhausted, but all are alive. If a rider does not intend to kill or exhaust his horse, he should use the travel rates listed for the war horse instead." (RC, p.88, Travelling Rates by Terrain Table)

This assumes a rate of 72 miles/day under ideal circumstances (36 miles/day with a war horse or travelling without killing a riding horse). Is this realistic? Google agrees mostly, so I'll take it as a basis and go from there.


Now some calculations and additions to make it fit.

With 36 miles/day being the suggested norm, I'd go for 3 possible random encounters on the road (ca. 3 times the norm). Each encounter could force a skill check to avoid and costs Endurance.

This leaves us with the following basics to apply the idea everywhere.

Having four legs is a boon, so a horse would only loose halv the Endurance a human would, while sitting on a horse makes a human only loose half of what the horse is about to loose. Other than that I took the base rate (36 miles for being exhausted) for a given factor (riding horse, 2 HD) and divided it by the Endurance (4 + 2 HD = 6). So here are a few examples how it turns out (based on the table above):

With this on hand it is possible to see how far an army might get with forced marching and how many dead would be left behind.

Or one could try and see if a courier would be able to deliver a urgent message in a totally random setting and with a satisfying result...

So this is a small setting and a dry-run.

Cave Bridge is a dangerous farmland in the frozen north.
The weather there is usually almost windy and warm out (because of the Letchhead Gulf).
It is ruled by an ancient vampire (Count Shrop).
The people of this domain are cannibals (a cult that worships the Count and eats the sucked-out victims of him and his vampires).
This domain is famous because it is a place of uncanny magical occurances (see the red skulls).
The laws of this domain are harsh and unjust. Punishments for misdeeds tend to be almost nonexistent.
Recently, the land has experienced the flight of a prince and his forbidden lover into hiding .

Our courier starts at the Wolf Coast from the Tower of the Relentless and aims to reach Muntonburgh as fast as possible. He wants to arrive within the day.

Using the roads available, he has to pass two towns (Trebluff, Havster Springs) and use Queen's Bridge to get there. It's round about 100 miles.

This means he has to travel through Berkway Forest, the Griffon Morass and, finally, the Marsh of Destruction. 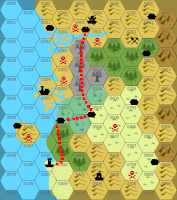 And now we deliver an importand message

We need a normal horse and a skilled Courier to make this happen. If it is a player character, one starts with the distance he wants to cover and goes from there (maybe even with an individual horse, healing potions, etc.). In this example I'll keep it as simple as possible (with no random encounters):

So they manage to arrive in Muntburgh, the courier is dead tired, the horse stops and drops dead. I'm happy with that, it is as it should be. But don't try this at home...
Posted by Jens D. at 6:20 PM