Revisions Part 1: The D&D RC was never complete or finished

WotC tries to be a moving target in a bullet storm right now. Whoever thought it was a great idea to ACT as if a document that needs recourse to legal advice can be open to public review just by calling it a "playtest" to associate it with some sort of development process in gaming, must think gamers are GULLIBLE enough to actually think they are involved that way and not just shut up. And if you did their survey and believe it'll have any value to WotC, then I have a bridge to sell you might be interested in. In other words: revision your work away from that bullshit. I'll do just that!

Edit 28JAN23: I stand corrected, and I'm proud of all the fans standing up protecting D&D. Good show! The dragon is sleeping again ... I'll just say that we have no way of knowing if they actually looked at the surveys. It's actually still a bit ridiculous to assume they did, as what they are saying now is EXACTLY mirroring the original first response: the OGL 1.0a cannot go without lots of hurt for WotC. That has been clear from day 1. To claim now it's the survey from last week, well, it's disingenuous. Either way, it is the result that counts! Big Corp still sucks :)

I never used the OGL

I always found it suspect that something that isn't protected by law (like rules) needed a license to begin with. A lot of this is lawyer speak (think: smoke and mirrors) to widen the grey area for the corporation to act in, and that was pretty obvious from the beginning. If you make it your own, it is, by the same logic, your own and someone else may rewrite it and use it just the same. Them's the rules ...

Now, the main problem with Big Corp thinking in this very special situation is: they want to deviate from what they claim "stewardship" for (a term that only came up just now, and it is ludicrous to believe something like that might be compatible with a hyper-capitalist, neo liberal locust-think), well, they want to deviate just enough to act as if they are selling something new while keeping the old barred from any further use. The illusion of infinite growth colliding with the open source mindset ingrained deep into the original game and its first couple of iterations.

We have seen over the years how they tried to mutilate the original game to get some resemblance of the D&D theme park they are trying to have you pay for ... forever and ever. This latest stunt is a reminder not only of the incompetent greed involved in this whole affair, but also of what your worth as a customer is with these guys. Shut up, do as your told and pay for it, too, while you are at it. It is not about "stewardship", it is about interacting commodities (and yes, we are also commodities in this regard ... for them, anyway).

So I avoided the waters those sharks frequented, and that included avoiding their OGL. What I did, however, was licensing Monkey Business with Labyrinth Lord, and they are licensed via OGL1.0a (as far as I know). So that's still protected under some legacy rulings. Or whatever ... Still, MB needs a revision anyways, and with be67 as far done as it is now, that revision will be a conversion to my own game.

About the RC being unfinished ...

We always said that the D&D Rules Cyclopedia is the most complete D&D book out there. That is still true, it is just a very low standard to have, because that book was only as complete as they could make it. It's open for debate if an "official" revision of what was offered back in the 90s would even be possible, so it is what it is, and it will most likely stay that way.

When I started compiling be67, the first thing I thought I would do was setting it up as a module to alter Labyrinth Lord, which is, of course, a CLONE of the Basic Expert rules and therefor in the same family of rules as the D&D RC. It didn't take long to realize that making be67 its own game was not only just a couple of steps more to take, but it might become necessary as well, because it was so very much its own thing (hence, a MUTANT rather than a CLONE).

So I went for writing a complete game, which made it necessary to take a very hard look at the source material, if only to see what a "complete" version might entail. The first insight gained from that was a reminder of the damn scope of the RC. It is huge. Decades worth of playing it just once in its entirety.

The second insight was how much of a patchwork job it actually is: Weapon Mastery and Skill System are incomplete, lack proper editing and are definitely at best minimaly tested additions. It is full of little oddities that show what a hard job it must have been to compile all of that into one book. In the 90s, no less. Bits and pieces don't fit or are incomplete. Encounter matrix doesn't completely match the monster entries and while there is a lot of advice how to do a lot of what the book offers yourself, it left some huge parts unexplained (how to prepare proper dungeons, for instance).

What's more: once you take a REALLY close look, you'll find that it ALL connects just very loosely, as far as the numbers are concerned. Some of it is just copy/pasted and then expanded on without revision (or just checking if the math is right). How the original design connected is a black box, most of the time. The whole "race as class" discussion is a great indicator for that. Looking at the design it becomes obvious that there is a underlying logic to the classes offered in the book, with some of them offering some ideas where to go with that (druid and monk come to mind).

If you understand how that works, you can build every class you'd like, race is just a feature of that process. One more aspect to add. There is a chance for this to be so open, it'd allow complete customization of all aspects of the rules. It just was never done.

And fair enough, you don't have to look under the hood to play the game. But you have to when you are writing your own. Turns out, reconstructing that "black box" that is the original design will have you end up with something else entirely. And the deeper into the design the changes are, the bigger are the implications for how the game manifests on the surface. Especially if you gear it towards another setting, as be67 tries to do (Weird Sixties Grindhouse ftw, people!).

If I try to explain how monsters relate to challenge rating so a GM can potentially diy the shit out of it, I have to write that myself. If I want the GM to be able to build their own classes, I'll have to come up with something myself, because it doesn't exist in the original book. If I want to connect the numbers the game produces with how to structure adventures, or campaigns even, I have to do that from scratch, as the original book doesn't offer that ... And so on and so forth.

In that sense, the D&D RC is a very unfinished and incomplete book. Luckily so, because if they aren't able to connect all those dots, and a designer is to find their own solutions, there's no way they can claim it to be theirs, just for the tranparence of it all.

As a matter of fact, I'm not sure they are even able to entangle what has been the originl design and what has evolved because of fan or hobbyist initiative. The D&D RC, following that logic, was a very specific interpretation of one specific strain of the D&D family of games, already incorporating not original design, but concepts, insights and ideas established elsewhere (not only from the fan base, but also through many, many other successful rpgs out there).

An incomplete patch work that cannot be true to the original design due to being exposed to external and uncontrollable influences and bases its design on some unknown and obscure metric, barely makes a good argument for being protected by any means. In my opinion.

As things stand right now, it doesn't seem safe to associate with the D&D brand even superficially. Therefore, all publications I can manage to put out here in the next 5 months will deny all connection to the source other than it being inspiration. I'll be open about how it all connects, so it will be my very own take on some of the same principles established so many years ago. A retroclone mutant, if you will.

There is freedom in going it all the way all alone (and I might not be alone, actually). We'll see if I can claim be67 to be part of the OSR family or not. It's all still easily enough hacked and connected, but that's just something tainted now. What you guys do at your table is yours to decide, naturally, I just can't believe that it'll be open discourse from now on. At least it's not safe to assume so right now.

Right now, WotC tries to play it for time while funneling critique into non-existance, but the damage is done and gears started moving all over the place. Interesting times.

In closing I want to share a double page from be67 that took me a long time to complete, for the reasons I stated above. It might need more context, but I think the basic premise is easily enough grasped: it is a dynamic random encounter table that should help propelling the narrative in a way forward that supports the Grindhouse Feature the GM has prepared. Here we go: 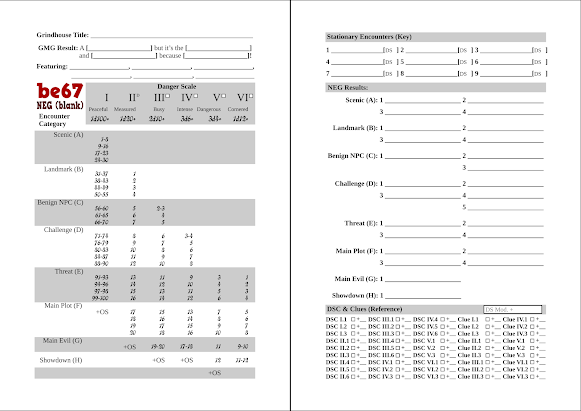 Isn't she a beauty? Anyway. What I'm trying to say and show here is that be67 will not only be its own thing, it'll also be "complete" in a sense that there'll be no part of the rules that's not so throroughly and openly connected, that you'd have to guess why it is the way it is in its context. The above in part of a little machine that'll allow a GM to always keep the game within the parameters it establishes. with very little bookkeeping, I might add.

And that's that. If you've published something that may be construed to be close to what the Wizards do at that Coast, my advice would be to revise the hell out of it and build as much distance to those greedy fuckers as possible. I'll definitely do that.

And if you are in it for what I'm trying to do here, I hope you'll enjoy be67 as its own thing, just as much as you'd have while I could have associated it with the origins of the hobby. The hint needs to be enough.

Take care, friends and neighbors. Thanks for reading!