Elves should be immortal!

So me and my flatmate were discussing the absurd idea of Elves having schlongs to reproduce or to make little Half Elves. My flatmate is kind of a Tolkien connoisseur and starts quoting that Half Elves are very VERY rare and a gift granted only by the gods. And for making it even remotely possible to happen, an Elf has to give up immortality. Because while being immortal, there is no need to reproduce! It should be like this in D&D, too.

But how may I play an immortal being in D&D?

Obviously it's not consistend with the rules and it always bothered me that an level 1 Elf was considerably older than, say, humans but was nearly as weak and inexperienced as those half-sophisticated apes with sticks. Plus, he has level restrictions! WTF?! Without an reasonable explanation well established in an campaign you might get... 3rd Edition and special friends?

Is there an easy solution to make it all work out?

Might be. This is how I propose it in my campaign, anyway. Elves are classic Fairies, etheral and immortal beings with only one foot in reality. With all the magic forests where you might turn the wrong way and end up in Alfheim or Eldamar or something. I have The Wild Hunt with Oberon in the lead. Whatever makes THE GAME interesting. It's like in Poul Andersons novel The Broken Sword. And if a player wants to play an Elf, he may do that. BUT...

There are two direct ways for the Fae to interact with the world of the living. They might steal a human child and raise it as their own (The Changeling, my substitute for the Half Elf, more on that later in this post).

Or one of them might decide to roam the world as a mortal for some time to protect the way of the Elves (protect natures beauty, you know the drill)*. It's a perfect excuse for an Adventurer. Their time as mortals needs to be restricted (by level, in game terms), because there is always a danger of contamination. After that period they may not make it back. They start so weak because they have to learn to live under those conditions and all former expierence is more in the way than helping (right there is the age difference). If they die, their corpse has to be brought back to an Elven forest or their soul might not find its way back to the Elven Court. They don't need sleep as humans do, but when they dream, they visit their homeland and may communicate with their friends (this is for possible adventure hooks, too). They get very depressive and cranky if they don't have those 4 hours.

A group of banished Elves, forced to live under the earth and never to feel the joy and beauty of their realm and immortality again. Made them a little bitter. How do they reproduce? I don't know, maybe they trick happy Elves to the Dark Side (they really hate those guys). They seek immortality (Lolth is one of those who made it, hence the cult, works fine with the Rules Cyclopedia) or revenge. Unpleasant folk to have around.

The Changeling (aka Prince Charming)** 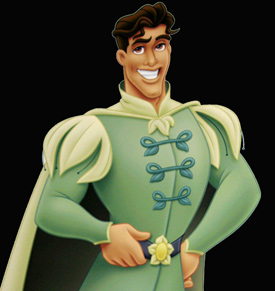 It's Disneys fault!
He's your regular Knight in Shining Armour. Raised by tricky Elves (they stole him, to begin with) he comes around like a Disney incarnation of Prince Charming. Always smiling, always rescuing damsels in distress, always popular at parties. And sooner or later he disappears into the dawn, leaving behind broken hearts and the question "Where oh where did the fascination come from?!". Being a classic hedonist he loves to enjoy life and beauty, fighting evil is just a way for him to become famous (and kick ugly people). He likes Elves and knows what's good for you.